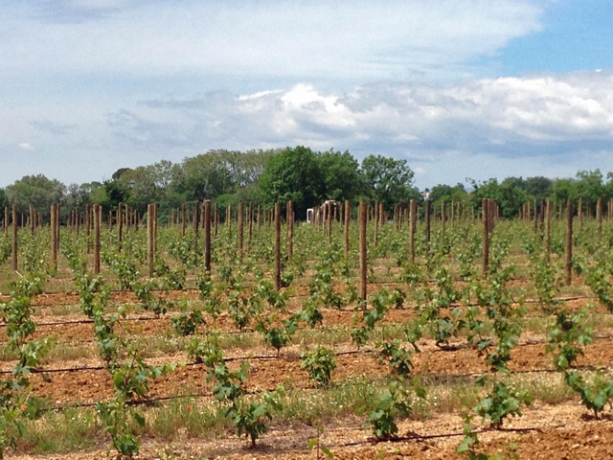 We are one year on from planting 4 hectares of Chardonnay and it is growing at an unprecedented rate! So much so that we have neighbouring farmers stopping to admire it and question what we have done that has resulted in such astronomic growth!!! The answer to that, quite frankly is the weather, combined with what is good soil and a fortuitous elevation and aspect. After a long and relatively cold winter, we have had one of the wettest springs on record. Our annual rainfall is around 600mm and this year we have received 300mm or half of that rainfall solely in the month of March! Follow this with periods of warm, unadulterated sunshine and no surprise that all green vegetation is on a massive growth spurt!

The weather did however delay the next stage in the development of the new Chardonnay vineyard, which is the installation of the trellising system of posts and wires. Planned for February and March, the ground has been so wet that the work has only just now finished in the month of May! We choose to use the highest quality wooden posts from a Portuguese supplier called Carmo in our vineyards, which quite apart from their obvious strength and durability, also make for a very attractive trellising system. At this stage we also install the fruit wire, which is the lowest of the trellis wires at which level the fruit will develop. This is a fixed, metal wire that does not move. The two higher level wires will be installed later and we choose to use a synthetic, nylon wire called ‘Deltex’ that is more flexible and can be raised and lowered to follow the dynamic growth of the vines.

We are now putting in bamboo stakes as support for each vine (all 17,000 of them!), to guide their growth going forward and then attaching the vines to the fruit wire. Given the vigour of these vines, most of them are already higher than the wire! So still a lot of work to be done, but we have the beginnings of what will be a magnificent vineyard!